The virtual reality glasses made up of carton released in June at Google’s I/O Conference. Since then, the headset had been sold 500,000 units through several third-party vendors and continues to break records.
The project aroused such great interest that the company now thinks about doubling down on the headset.
The first thing that Google planned to do is to create Cardboard section on Play Store. Google Cardboard now has a selection of Cardboard-compatible apps and games. One of the most interesting features the application has that it allows users to experience virtual reality through Google Earth and YouTube.
Now that Google has its new Cardboard SDK for Android and Unity, it looks like that Google wants to get as much market share as possible by selling more Google Cardboards.
Google “Today we’re introducing Cardboard SDKs for Android and Unity. With both Android and Unity support, you can use the tools you already know and love “said in blog post.  Read More

Google is seeking FCC permission to test new technology which could marry the speed of Google Fiber to wireless services.

In an application to the US Federal Communications Commission (FCC) on Monday, the tech giant requested permission to conduct tests in California across wireless spectrums. Of particular interest, asnoted by Reuters, is a rarely used millimeter-wave frequency that is capable of transmitting vast amounts of information across the air.

According to the publication, the tests could signal the creation of the base technology for use in high-speed, wireless connectivity — part of Google’s plan to extend its reach in the Internet service provider industry. If so, this would obliviate the need for underground cables or fiber. A fast broadband service beamed into our homes could act as an extension to Google’s slowly expanding Fiber service, which offers up to one gigabit in upload and download speed — but laying the groundwork is a slow process.

The application, signed off by Google Access and Energy division chief Craig Barratt, documents a 180-day test which the company says will provide “valuable insight into Google’s technology innovations and potential business plans and strategy.

” Although much of the application is redacted in order to protect confidential data, the tech giant states that the purpose of the test is to “expeditiously test radios in a way that is likely to contribute to the development, extension, expansion or utilization of the radio art.”

Social Media 2014 Statistics – an interactive Infographic you’ve been waiting for!

How fast Social Media is expanding in 2014? Do you know how many active users Facebook has? How fast Google+ is evolving? How many users have never tweeted after opening their account on Twitter? Do these numbers matter to you? Let me give you a quick example-

A friend of mine who has been struggling to hire a PHP developer was chatting with me and I suggested him to try Facebook ads to reach out good developers based on his desirable location and other preferences. He wasn’t ready to try this at all. I took the liberty and started some Facebook ads on my own, fixed a budget of $20 for a day for a pilot project. He was stunned to see the results, more than 23K people reached, 300+ visited the site and 43 forwarded their resume or called him. All this, just for $20.

If you’re managing social media for your businesses, it is important to keep track of statistics so it keeps your strategy in-line. Last year we received an overwhelming response with our social media statistics of 2013. This year again we have taken upon ourselves to answer all your questions about various social networks and their active/total users in 2014!

The infographic below covers all the latest Social Media facts, figures, numbers and statistics of 2014. Some of the mind-blowing facts are mentioned here:

Google has unveiled an upgrade to the way it interprets users’ search requests.

The new algorithm, codenamed Hummingbird, is the first major upgrade for three years.

It has already been in use for about a month, and affects about 90% of Google searches.

At a presentation on Thursday, the search giant was short on specifics but said Hummingbird is especially useful for longer and more complex queries.

Google stressed that a new algorithm is important as users expect more natural and conversational interactions with a search engine – for example, using their voice to speak requests into mobile phones, smart watches and other wearable technology.

Hummingbird is focused more on ranking information based on a more intelligent understanding of search requests, unlike its predecessor, Caffeine, which was targeted at better indexing of websites.

It is more capable of understanding concepts and the relationships between them rather than simply words, which leads to more fluid interactions. In that sense, it is an extension of Google’s “Knowledge Graph” concept introduced last year aimed at making interactions more human.  Read More

Google buys Bump to share anything between your phone and laptop

It’s a great app and a great idea — I can’t say how many times I’ve wanted to instantly share something between my devices, and waited, frustrated, for iCloud to sync up photos before finally giving up in frustration and just emailing them to myself. Apple is fixing that, theoretically, with Airdrop on iOS 7, so by buying Bump, Google has sent a shot across the bow of its biggest mobile rival.

Bump also makes the collaborative photo album Flock, which allows you to take photos of an event or vacation with friends and share them all between you. That’s something Facebook just made potentially obsolete with its new shared photos albums … but not if Google incorporates it into Google+ in some way.  Read More

Nexus 7 Trade-Ins Suggest Lots Of Upgraders To New Model, Little To No Interest From The iPad Crowd

The new Google Nexus 7 is a big improvement over the original with a bunch of additions like LTE and a super high-resolution display – the best in tablets, in fact. And that’s driving a lot of first generation device owners to trade in their old Nexus 7, according to gadget buy-back site Gazelle. There was a 333 percent spike in the number of Nexus 7 tablets traded in compared to the same day last week, for example.

Between Tuesday and Wednesday, that spike was even higher – a 442 percent jump in Nexus 7 tablets happened between the day before Google’s official unveiling of the new model, and the day of. The Nexus 7 trade-in activity spiked so high that it made up nearly a quarter of all trade-ins for non-iPad tablets since the site began accepting them earlier this year.

Wednesday, the day Google made its announcement, was also the biggest Nexus 7 trade-in day at Gazelle to date, beating the next biggest day by 380 percent. That previous record was set when the new Nexus 7 leaked on July 17, which clearly prompted early adopters to take advantage of a small head start ahead of the big reveal.  Read More

The dongle is plugged into a television’s HDMI port, and allows users to stream media from smartphones, tablets and computers.

Launching immediately in the US, the device will cost $35 (£23). There is as yet no word on international launches.

Google also announced an upgraded Nexus 7 tablet, the first to run the new version of the Android system.

Chromecast is Google’s latest attempt to gain ground in the television industry.

In 2012, Google faltered in its attempts to make a move into the living room, considered by many experts to be ripe ground for making large profits through advertising.

Google’s partnership with Sony, with which it released a £200 set-top box, was poorly received.

That attempt followed an even earlier false start in 2010 when it launched Google TV, a service that was blocked by several TV networks, and suffered greatly from requiring consumers to buy expensive hardware. 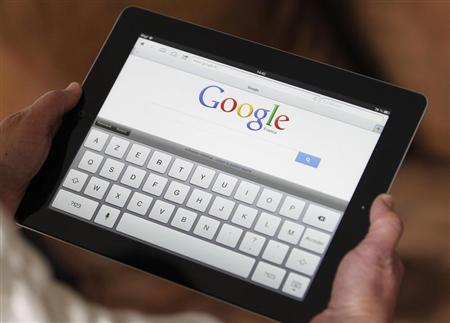 France’s data protection watchdog (CNIL) said Google had broken French law and gave it three months to change its privacy policies or risk a fine of up to 150,000 euros ($200,000).

Spain’s Data Protection Agency (AEPD) told Google it would be fined between 40,000 euros and 300,000 for five violations of the law, that it had failed to be clear about what it did with data, may be processing a “disproportionate” amount and holding onto it for an “undetermined or unjustified” period of time.

The CNIL, which has been leading Europe’s inquiry since Google launched its consolidated privacy policy in March 2012, said Britain, Germany, Italy and the Netherlands would be taking similar action against the world’s No. 1 search engine.

“By the end of July, all the authorities within the (EU data protection) task force will have taken coercive action against Google,” said CNIL President Isabelle Falque-Pierrotin.

Last year, Google consolidated its 60 privacy policies into one and started combining data collected on individual users across its services, including YouTube, Gmail and social network Google+. It gave users no means to opt out.

National data protection regulators in Europe began a joint inquiry as a result. They gave Google until February to propose changes but it did not make any. Google had several meetings with the watchdogs and argued that combining its policies made it easier for users to understand.

The CNIL’s move is seen by legal experts and policymakers as a test of Europe’s ability to influence the behavior of international Internet companies.  Read More

Paul Sakuma, File/Associated Press – FILE – In this April 12, 2012 file photo, Google workers ride bikes outside of Google headquarters in Mountain View, Calif. Google on Tuesday, June 18, 2013, sharply challenged the federal government’s gag order on its Internet surveillance program, citing what it described as a First Amendment right to divulge how many requests it receives from the government for data about its.

Google on Tuesday sharply challenged the federal government’s gag order on its Internet surveillance program, citing what it described as a First Amendment right to divulge how many requests it receives from the government for data about its customers in the name of national security.

The move came in a legal motion filed in the secretive Foreign Intelligence Surveillance Court and was aimed at mending Google’s reputation after it was identified this month as one of nine U.S. Internet companies that gave the National Security Agency access to data on its customers. Revelations about the program, known as PRISM, by a former NSA contractor has cracked open a broader debate about the privacy of American’s communications from government monitoring.

The publication of such data requests would answer questions about the number of Google users or accounts affected by U.S. intelligence activities. But it wouldn’t answer more critical questions on how much data is being disclosed, including whether information belonging to Americans has been swept up into investigations on a foreign targets.
“Google’s reputation and business has been harmed by the false or misleading reports in the media, and Google’s users are concerned by the allegations,” according to the company’s motion. “Google must respond to such claims with more than generalities.”